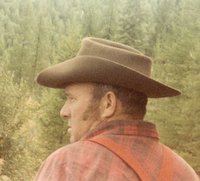 Allen “Bug” Quincy (84) long time resident of Emida, ID passed away February 23, 2021. He was born January 30, 1937 in Tensed, ID. Bug was the son of Alfred and Alberta (Inscore) Quincy. Bug grew up in Emida. He met his soulmate, Sharon Elliott (Quincy) and they were married on November 4, 1955. Bug and Sharon spent 65 years married. They made their home in Emida, and they were never apart. Bug worked in the woods all his life, as a sawyer, equipment operator, and truck driver. Bug and Sharon had a cattle and horse ranch for 30 years. Bug was an avid horseback rider, who loved his dogs, fishing, and hunting. He would help anyone who needed helping. He could fill up a room with his jolly laugh. Bug and Sharon were always doing something or going somewhere with their beloved dog "Susie". After retirement, Bug worked part time driving a dump truck for Bob Short, his nephew. Bug and Sharon rode their 4-wheeler and hit all the yard sales in the summer months. Bug loved to gamble, and they spent lots of time at one of the Casinos in the area. Bug is survived by his loving wife Sharon of Emida, and his daughter Kelly Lockard of Emida. Also surviving are his grandchildren, Sarah Bailey of St. Maries, Jasen (Mandy) Quincy of Emida, Jake (Katie) Lockard of St. Maries, 7 great grandchildren, 1 great-great granddaughter and many nieces and nephews. He was preceded in death by his parents, and his son, Rick Quincy, his son-in-law Steve Lockard, his sisters Jackie Short, Donna White, brothers-in-Law Robert Short Sr. and Stanley White. Bug will be missed greatly. At his request, there will be no service.