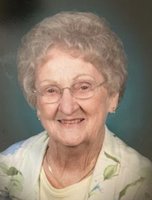 Phyllis Margaret Smith (96) resident of St. Maries, ID passed away at Creekside Inn in Coeur d’ Alene, ID on April 25, 2021. She was born June 15, 1924 in Spokane, WA to George Edward and Dorothy Ann (Mulroney) Yenor. She was the oldest and last surviving daughter of Ed and Dorothy, having been preceded in death by Shirley Christensen, Jacque Ruggenberg, Pat Lupo and Kathy Rumelhart. Phyllis grew up in St. Maries and graduated from St. Maries High School in 1942. She received her Bachelor’s Degree from Holy Names College in Spokane, WA, and after a year serving an internship at Sacred Heart Hospital, became a Medical Technologist. Phyllis worked in this profession for about 5 years. In 1953, Phyllis married Edward F. Smith of St. Maries, Idaho. After discontinuing her work as a Medical Technologist, Phyllis assisted her husband by keeping books for him at their beer distributorship. They became parents of Kelly Michael Smith and Sharyn Kay (Smith) Boller, after which, Phyllis remained at home caring for their children. In 1963, at the urging of Ben Lowe, Superintendent of Schools, she became certified to teach. She taught math in St. Maries at the St. Maries Junior High School, now St. Maries Middle School. Ed passed away in March of 1966. Phyllis continued teaching until she retired in 1989, after a 26-year career. Phyllis was a member of St. Mary’s Catholic Church where she was a member of the choir for many years. She also was a member of the non-denominational choir, The Crown of Thorns, in Spokane, Washington. and a member of the Elks Lodge in St. Maries. She was an avid reader and enjoyed gardening and painting. At the top of her list of enjoyment were her many travels, particularly to the Oregon Coast, “Happy Place”. Phyllis is survived by her children, Kelly (Debi) Smith and Sharyn (Randie) Boller; her grandchildren, Dustin (Angela) Boller and Brandon (Kelsey) Boller; and Jenawae (Josh) Pacatang; and her great-grandchildren, Elliot, Dominic and Hudson Boller, and Ceydi and Gunner Pacatang. A rosary will be recited in her honor on May 6, 2021 at 6:00 pm at St. Mary Immaculate Catholic Church in St. Maries. A Memorial Mass will take place on May 7, 2021 at 1:00 pm with a gathering of friends and family to follow at the Elks Lodge in St. Maries.