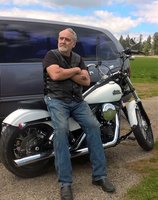 Earnest Jay Porter Jr. (69) resident of St. Maries, ID passed away at the Schneidmiller Hospice House on May 8, 2021. He was born to Earnest Jay Sr. and Mable Porter on February 14, 1952, in Alexandria, Louisiana. Earnest moved with his family to California when he was still a child and attended school there until he was 15. He went to work full-time in construction when he left school. In 1970 at the age of 17, Earnest enlisted in the U.S. Army and served 3 years during the Vietnam Era as a Weapons Instructor. After Earnest was honorably discharged, he moved to Richmond, CA and again worked in construction. Around 1985 his employment opportunities brought him to the Pacific Northwest. He lived in Nevada, Spokane Valley, Rathdrum, and Coeur d’ Alene before moving to St. Maries. He fell in love with the area around St. Maries and the community. In 2019 he met Angela Willingham through mutual friends on Facebook. They corresponded before he made the trip to Western Washington to meet her. They fell very much in love and in January 2021 they joined their hearts together in front of the Lord. Earnest loved to be outdoors, specifically on the St. Joe River, and he loved fishing! He also enjoyed hunting, woodworking, and riding motorcycles. He was an extremely talented craftsman building all kinds of furniture. Earnest is survived by his companion Angela Willingham; sons Aaron (Anne) Porter of Saanich, BC Canada and Arthur (Jordan) Porter of Spokane, WA; and 2 grandchildren. He is also survived by many friends and neighbors he made, and his caregiver Amanda Dahlkey and her family. He is preceded in death by his parents and his brothers. A graveside memorial service will be Saturday, October 16, 2021 at 11:00 am at Woodlawn Cemetery. Military Honors will be presented.