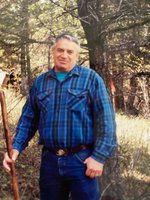 George W. Boggs (75) resident of St. Maries, ID went to be with the Lord on May 13, 2021. He was born to Myron and Jeanette Boggs on February 26, 1946 in Ione, WA. George grew up and attended school in Ione graduating from Selkirk High School in 1964. Following high school, George married his high school sweetheart Connie Taft. The couple had 2 girls; Cindy and Deborah. George’s job as a mechanic took the family all over the state of Washington. They spent a good amount of time in Elmer City where George was a mechanic for Grand Coulee Dam, then later moved to East Wenatchee. Years later, George’s work took him to Idaho, where he met Patty Magers and made their home up the St. Joe River near Calder, ID. He worked for Scott & Son’s Logging for many years as a mechanic, until an on-the-job injury forced him into retirement. George was an avid outdoorsman. He loved hunting and fishing and was equally good at both. He enjoyed mining and panning for gold, camping, and riding 4-wheelers. George was a handyman and could build anything. He also enjoyed family gatherings and visits. George is survived by his daughters Cindy (Darren) Ross of Colville, WA and Deborah Boggs of Spokane, WA; stepchildren Mike (Maria) Magers of Pinehurst, ID, Cindy Thomas and Maxine Magers both of St. Maries, ID, and Patsy Magers of Calder, ID; brothers Albert Boggs of Airway Heights, WA, Ray Boggs of Ione, WA, Byron Boggs of Deep Lake, WA, and Lawrence Boggs of Addy, WA; sisters Loretta Heines of Colville, WA and Violet Sawtelle of Puyallup, WA; 13 grandchildren; 25 great-grandchildren; numerous nieces and nephews. He is preceded in death by his parents, wife Patty Boggs, brothers Donald Best and Orville Boggs, and sister Daisy Grogan. A graveside service will be held for George Boggs at the Ione, WA Cemetery on June 19, 2021 at 12:00 pm. A catered Celebration of Life reception will follow the graveside service at the Ione City Park. The family is combining George’s reception with his brother Orville. If you wish to bring potluck dishes you can.