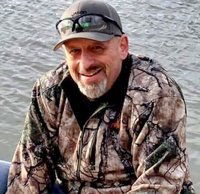 Shane A. Michael (57) lifelong resident of St. Maries, ID passed away at Kootenai Health on May 26, 2021. He was born to Duffer and Beverly (Nelson/Anderson) Michael on September 24, 1963 in St. Maries, ID. Shane grew up in Fernwood and St. Maries. He graduated from St. Maries High School with the class of 1981. Following high school, Shane went to work for Regulus Stud Mills, Inc. He later went to work at Emerald Creek Garnet Mill. In 1985 he married Irene Kachelmier and the couple had their daughter Sheena. Their marriage later ended in divorce . In 2001 Shane went to work for Plummer Forest Products. The mill was acquired by Stimson Lumber Company, and he was still currently working for them as an operator in the sawmill. Shane didn’t know a stranger and had the gift of gab. He would do anything for anyone and enjoyed being around his friends and family. His grandchildren specifically had him wrapped around their fingers. Shane enjoyed the outdoors and all they had to offer; hunting, fishing , 4-wheeling, hanging out on the river, traveling, and in his earlier days golfing. He loved his animals, and it was a known fact and joke that he would even take his cat camping. His sense of humor and smile were contagious. He was stubborn and tough but cherished his friends and family. Shane is survived by his daughter Sheena Michael and his grandchildren Letty and Remy Smith all of St. Maries; half siblings Alissa Michael and Brad Michael of St. Maries; his parents Duffer Michael and Beverly Anderson of St. Maries; numerous aunts, uncles, cousins, nieces and nephews. He is preceded in death by his stepfather Butch Anderson, stepmother Joyce Michael, and his cousin and friend Brent Michael. A memorial service will be Friday, June 4, 2021 at 2:00 pm at the Elks Lodge in St. Maries, ID. A gathering of family and friends will follow to share a meal.