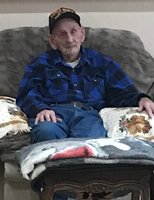 Tom Lamb (99) longtime resident of Calder, ID passed away peacefully at Benewah Community Hospital on June 13, 2021, where he had recently been under the care of Hospice. Tom was born in Potter Valley, CA to Edward Thomas Lamb and Lilly Belle King on December 13, 1921. He grew up on a farm where he later entered the Army and acquired numerous medals for marksmanship and other assorted disciplines. Tom also served during World War II where he shed blood for his country and was awarded 2 Purple Hearts and 2 Bronze Stars. His job in the war was demolition (blowing things up). After leaving the army with an honorable discharge, he found and married his wife Eva and they had 2 daughters Alice and Cathy. He is survived by Alice and Cathy, 3 grandchildren, 10 great-grandchildren, and 5 great-great grandchildren. This man was a true American hero, as were all who served and fought in WWII and all other wars America has fought. His wishes in death were simple, he wanted no fan fare of fuss over him nor any memorial services of any kind. So, if you wish to honor this man, please feel free to make a generous donation to any Hospice of your choice.