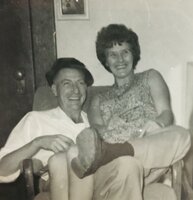 Richard H. Hodge (87) passed away on September 6, 2021, and his loving wife of 63 years, Joy C. Hodge (89) joined him on September 14, 2021. Both passed at Valley Vista Care Center in St. Maries, ID of natural causes. They were preceded in death by her parents, Charles Jenicek and Reba Allison, brother James Jenicek, his parents Milton and Marie Hodge, sister Bernice Thompson, brother Harvey Bud Hodge, daughter Nadine Hodge and grandson Jason Ross. Married on November 9, 1957, they began their journey together with joy’s daughters Robin, Londa, and Marla before adding Sharil and Nadine to their lives. With the exception of Rich’s time in the Army, they lived in and around Harrison, ID all of their lives. Joy was born in Harrison to Charles (AKA One-Shot-Charlie) and Reba Allison. Shortly after high school, Joy married Robert Schauls. Together they had Robin Schauls Bruneel, Londa Rae Schauls Schoeffler, and Marla Jo Schauls. She and bob later divorced. Richard was born in Coeur d’ Alene to Milton and Marie Hodge. He joined the Army in 1957 and served his country for 2 years. Prior to his release from the Army, Richard and Joy were married in Olympia, WA. During Rich’s service time they resided in Tillicum, WA where Sharil Anne Hodge Smith was born before moving back to Idaho. For a time, the family lived with Rich’s mother at his childhood home at Turner Bay. Later the family moved to the house at Powderhorn Bay built by Joy’s father Charles. Nadine Marie Hodge was born while they lived here. Shortly thereafter they moved into Harrison where they spent the remainder of their lives together. Both Rich and Joy attended and graduated from Harrison High School, Home of the Spartans. Earlier in their marriage they enjoyed going to local dances, most of the time with the girls in tow. They hosted many pinochle parties with several couples and enjoyed card parties at the Harrison Grange Hall. Rich began logging in his teens and continued for many years, working for numerous companies throughout the area. He worked until a logging accident forced his early retirement. A favorite pastime was camping. Early on many trips were with Herb and Vivienne Palmer and family. Later they treasured their time together with Paul and Esther Bartlett, hunting upland game birds, fishing, camping, card games, and practical jokes. In their late years, rather than hunting wildlife to feed the family, they fed the wildlife that frequented their yard much to the chagrin of the neighbors. While Rich was working in the woods or hunting and fishing, Joy kept busy with the local EMT’s, TOPS, Senior Center, and a Kitchen Band. She was named Citizen of the Year in 2010. They loved being part of the Old Timers Picnic and catching up with old friends and loved ones. In 1997 they were crowned King and Queen. Over the years they have been known by many different names by family and friends. Rich as Dad, Grandpa, Godfather, and the Old Fella. Joy as Mom, Grandma, Joyful, and Bernice. And both as GBTL (Grandma or Grandpa by the lake). Rich and Joy are survived by brother Roger (Pat) Jenicek, children Robin Bruneel, Londa Schoeffler, Marla Schauls, and Sharil (Chad) Smith, 8 grandchildren, 11 great-grandchildren, 7 great-great grandchildren, and numerous nieces and nephews. Services will be held Saturday September 25, 2021, at 11:00 am at Hodge Funeral Home, 138 S. 8th Street, St. Maries, ID. A gathering of family and friends to share a light lunch will follow at the Tin Cup Coffee Shop in Harrison, ID. In lieu of flowers please consider donating to the Harrison Community Ambulance, Harrison Senior Center, or the Crane Historical Society. A special thanks to the staff at Valley Vista Care Center for their heartfelt love, care, and compassion for our parents, Rich and Joy Hodge.