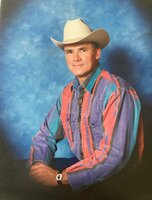 Marc Allen Hill passed away on October 21, 2021 in St. Maries, Idaho at the age of 82. He was born on June 17, 1939 to Martin Roy and Thyes Leon Hill in Brainerd, Minnesota. Marc grew up in Minnesota, Montana, and Washington state. He had a happy childhood and felt blessed to be surrounded by many relatives. He especially loved the times that he spent playing with his cousins. Some of the happiest days of his childhood were spent riding his favorite horse, Trixie. He truly loved and cherished those times and had very fond memories of his special horse. While living in Montana, his family lived on the Flathead Indian Reservation where they raised cattle. Marc learned at a very young age the value of hard work. He became a valuable asset, and there was very little that he could not do including driving a tractor at the young age of seven. Chief Paul Charlo, the Flathead Indian Chief, was so impressed with little Marc that he offered to adopt him and was ready to trade horses for the exchange. Marc’s dad delighted in telling the story of the chief’s offer. The Hill family remained close with the chief and all of their Native American friends. Marc graduated from East High School in Bremerton, Washington in 1957. He married Thelma Walton in 1959. They were later divorced. Marc graduated from Brigham Young University with a degree in Manufacturing and Engineering Technology. He was blessed with a brilliant mind and a keen intellect which led to numerous career opportunities. He specialized in tool and die manufacturing at the Puget Sound Naval Shipyard. After retiring from the shipyard, Marc joined Boeing as an aerospace engineer for several years. It was during this time that Marc also decided to return to school to become an Airframe and Powerplant Mechanic. He followed his dream of becoming a pilot, and he enjoyed spending many hours flying his airplanes. He was an avid outdoorsman and loved scuba diving, rafting, fishing, target shooting, camping, and riding his all-terrain vehicles. He also cherished his beloved dog, Rosie. Marc was a member of the Church of Jesus Christ of Latter-day Saints and served in many capacities during his life including bishop and high counselor. He deeply loved his family and was proud of his children and grandchildren. Marc is survived by his siblings, Marlene Roy Hill (James), Martin Kim Hill (Emiliya), and by his three children, Greg Hill, Andrea Hill Ellis (David), and Janine Hill Smith (Brad). He has nine grandchildren and six great grandchildren. He is preceded in death by his mother, father, and his son, Todd Marc Hill. The family would like to thank Marc’s many friends who cared for and looked after him and helped him to stay in his home on the beautiful mountain in St. Maries, Idaho.