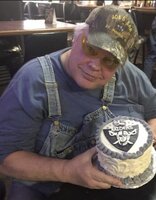 John A. “Taco” Martinez (68) longtime resident of St. Maries, Idaho passed away at his home on January 28, 2022. He was born in Los Angeles on March 27, 1953. At the age of 6, Taco came to St. Maries and joined the Warehime family. He attended school in St. Maries playing football and baseball. He graduated from St. Maries High School with the class of 1971. Following high school, Taco spent a brief time at North Idaho College. He first worked for Panhandle Drilling and Blasting with Les Warehime. Then he went to work for the Milwaukee Railroad and later the St. Maries River Railroad from which he retired. For many years Taco played men’s league basketball. He officiated Hoopfest in Spokane and Little League baseball in St. Maries. The Little League players gave him the name “Taco.” He enjoyed watching football, especially the Raiders. Only he could say “Raiders” in the deep TV voice. Taco liked traveling to games to see his favorite teams play. He saw several Mariners games and even Raiders games in California. He was actually a giant teddy bear. He would do anything for anyone, and he loved all of his countless friends. Socializing at Resor’s and Joe’s Bar was something he looked forward to. When he was able, he enjoyed fishing, hunting, and boating. Taco had a green thumb; he loved his plants and gardening. He will be remembered for his huge heart, his smile and bib overalls. Taco is survived by his sister Lezle (Andy) Resor of Maple Valley, WA, 2 nieces, 1 nephew and countless friends who were like family to him. He is preceded in death by his parents Les and Eva Warehime and Shirley Vallejo and brother Scott Warehime. A celebration of life will be held on Saturday, March 5, 2022, at 11:00 am at Joe’s Bar in St. Maries.