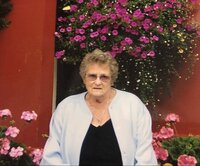 Anna May Jay (89) resident of Sun City, AZ passed away at her home on February 24, 2022. She was born to Raymond and Emma (Westphal) Lounsbury on February 11, 1933, in St. Maries, ID. Anna grew up in St. Maries and attended school there. In 1952, Anna married Norman Finstad in Coeur d’ Alene, ID. The couple made their home in St. Maries. As a young wife, she worked as a waitress and dishwasher at Pat & Scott’s. Her marriage to Norman ended in divorce. She then married Doyle Jay in 1970 in Coeur d’ Alene, ID. They also made their home in St. Maries. In 1972 Anna went to work for Valley Vista Care Center as a Nurses Aid and later a Housekeeping Supervisor. She retired from Valley Vista at the age of 75 in 2008. Sadly, her husband died in 2009. Anna enjoyed crochet, embroidery, quilting, and canning. She also enjoyed camping, traveling, and fishing. Anna is survived by her companion Oscar Carr Jr. of Sun City, AZ; daughter Alice (Scott) Hartley of Spokane Valley, WA; brothers Steven Lounsbury of Lewiston, ID, and Herman Lounsbury and Owen Lounsbury both of St. Maries, ID; sisters Cora Pike of St. Petersburg, FL, Emily Grizwald of Moses Lake, WA, and Joyce Cook of Juliaetta, ID. Also surviving are grandchildren Mike Hartley and Susie (Derick) Conner; great-grandchildren Bryanna Mills, Emma Conner, Tenyka Stone, and Mike Hartley Jr.; and great-great grandchildren Ashor Stone and Zeddicus Stone. She is preceded in death by her parents, her husband Doyle Jay, brother Arthur Lounsbury, sister Rose Klatt, Arthur Carr who she considered her son. At Anna’s request there will be no services. She will be laid to rest at Woodlawn Cemetery.