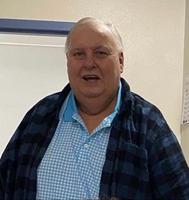 Leonard P. Wilks (66) lifetime resident of Emida, ID passed away at The Schneidmiller Hospice House on February 24, 2022 surrounded by his family. Leonard was born to Ivan and Byrl (Taylor) Wilks on November 2, 1955 in St. Maries, ID. He grew up in Emida and attended the school there and he also helped out working on his family’s farm. Leonard graduated from St. Maries High School with the class of 1974. Following high school Leonard continued to help on his family’s property, and he went to work in the woods logging. He later went to work in the tarring business with his brother Richard, and spent time working at the cedar mill in Santa and at Emerald Creek Garnet. The Wilks family was well known for their Christmas trees, specifically flocked trees. They had a natural tree farm on their property, and at one time one of their trees was chosen as the one to be on Christmas display in downtown Spokane. On September 24, 1988 Leonard married Rhonda Fricke at the Four Square Church in St. Maries, and they made their home on the family property. He loved where he lived, and ended up living on that property his whole life. Leonard ended up retiring at the age of 52. Leonard had a huge interest in International Scout, and he even owned a few over the years. He was a member of the St. Joe Valley Car Club, and had an old Chevy he would show off. Having nerves of steel, he taught most of his nieces and nephews to drive. An avid hunter, he loved the outdoors, and started taking his daughter hunting at the age of 3. In his younger days he owned a Harley that he would ride often. Leonard was a talented wood worker who specialized in building clocks. He also enjoyed blaring Beach Boy music, gunsmithing, playing poker with his gang, his Olympia Beer, and an occasional Black Velvet cocktail. Most of all, he enjoyed being around his family, and he deeply loved his children. You could always count on him to buy bundles of fireworks, and put on the best display on the 4th of July, a show he put on just for his family and close friends. Leonard is survived by his wife Rhonda at their home in Emida; children Heather Wilks of Post Falls, ID and Sam Teal of Emida, ID; 1 grandson Lukeah; and numerous nieces and nephews. He is preceded in death by his parents; siblings Emmalene Curtis, Kevin Wilks, Irene West, and Richard Wilks; and nephew Paul Wilks. At Leonard’s request there will be no services.