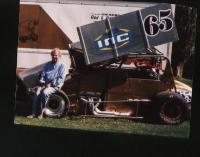 Frances M. Perkins (85) resident of St. Maries, ID died April 1, 2010 at St. Maries. She was born May 23, 1924 at Sacramento, CA. She grew up in Sacramento and graduated from High School there with the class of 1942. She married Melvin Spoor in the early 1940's. During that time, she went to work for the Army Corps of Engineers. She and Mr. Spoor were divorced in 1976. She married Carroll Perkins on Aug. 11, 1977 at Reno, NV She and her husband met each other while they were working in Saudi Arabia. After their marriage in Reno, they returned to Saudi Arabia where her husband was also employed by the U.S.Government. She worked as an administrative assistant for the Corp of Engineers and retired in 1987. She moved to Spokane, WA at that time. Later, She and her husband moved to St. Maries where they built their home on the St. Joe River. She was an active member of the St. Maries Council for the Arts. She and her husband also operated sprint racing cars and raced all over the Pacific Northwest. She was affiliated with the St. Maries Elks Ladies and the St. Maries Eagles Auxiliary. She is survived by her husband "Perk" at the family home. Sons and daughters-in-law Melvin and JoAnne Spoor of Sacramento, CA and Jeffrey and Cathy Spoor of Eugene, OR. She is also survived by step-son Stanley C. Perkins of Bayview, TX and step-daughter Brenda Lee Lewis of Oakland, CA . Also surviving are 4 grandchildren and 1 great grandchild. She was preceded in death by 1 brother and 1 sister. Memorial services and interment at her final resting place will be held at a later date. Hodge Funeral Home, St. Maries is caring for the family. You may sign her guest book at www.hodgefuneralhome.com Read Frances Perkins's Obituary and Guestbook on www.hodgefuneralhome.com.