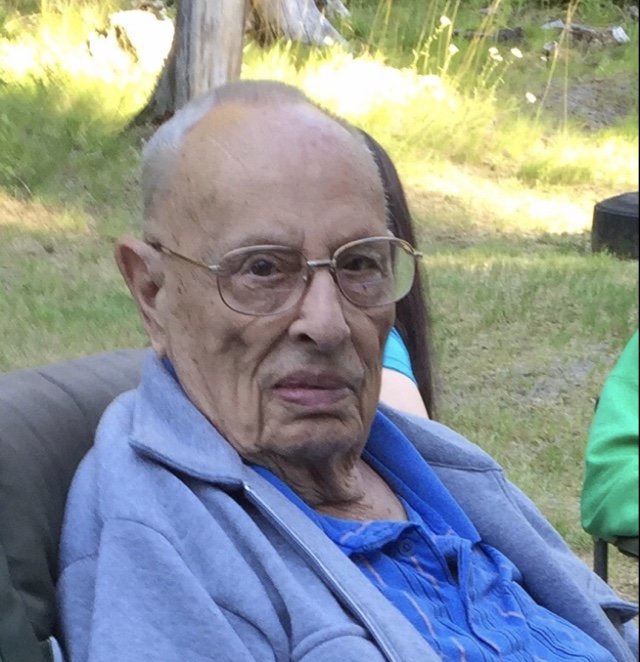 Robert Joseph Schwartz (96) resident of St. Maries, ID passed away on May 20, 2019 at the Schneidmiller Hospice House in Coeur d’ Alene, ID.  He was born to Albert and Rose Alice Schwartz on September 11, 1922 in Sioux City, IA.

Bob grew up around the Sioux City and Lake City, IA areas, and graduated high school from Auburn Iowa High School with the class of 1940.  Following high school, he enlisted with the US Coast Guard.  Bob is a WWII Veteran.  After serving 4 years, Bob was honorably discharged.  Bob married Marge Welch on January 16, 1947 in Crosspointe, MI; they have been married 72 years.  For the first few years of their marriage, Bob was a scout for the St. Louis Cardinals.  The couple moved to St. Maries, ID in 1958.  It was here Bob opened up the Western Auto store and he and Marge raised their 4 children.  He started every day with a cup of coffee at Mike’s Drug with the guys before opening the store.  In 1984 Bob retired from Western Auto.  He and Marge hooked up their travel trailer and traveled all over.  They went to Mexico, Canada, Alaska, and all over the United States.  They spent their winters in Wellton, AZ, and their summers in St. Maries.

Bob was an avid golfer who loved all sports.  He enjoyed watching his grandchildren play baseball and golf.  He also enjoyed blue back fishing at Dworshak, and hunting the woods of Northern Idaho.  Bob loved St. Maries, and he loved living where everyone knew each other.

Bob is survived by his wife Marge of St. Maries; children Jane (Paul) Jacobsen and Gary (Vicki) Schwartz all of St. Maries, ID, Linda (Steve) Harry of Scottsdale, AZ, and Bill Schwartz of Coeur d’ Alene, ID,; sister Beverly Bernholtz of Lake City, IA; 5 grandchildren; and 8 great-grandchildren.  He is preceded in death by his parents.

A celebration of Bob’s life will be at a later date this summer.  Memorial donations are suggested to Hospice of North Idaho, 2290 W Prairie Ave, Coeur d’ Alene, ID 83815.

Services for Robert Schwartz
There are no events scheduled. You can still show your support by planting a tree in memory of Robert Schwartz.
Visit the Tribute Store
Share Your Memory of
Robert
Upload Your Memory View All Memories
Be the first to upload a memory!
Share A Memory
Plant a Tree