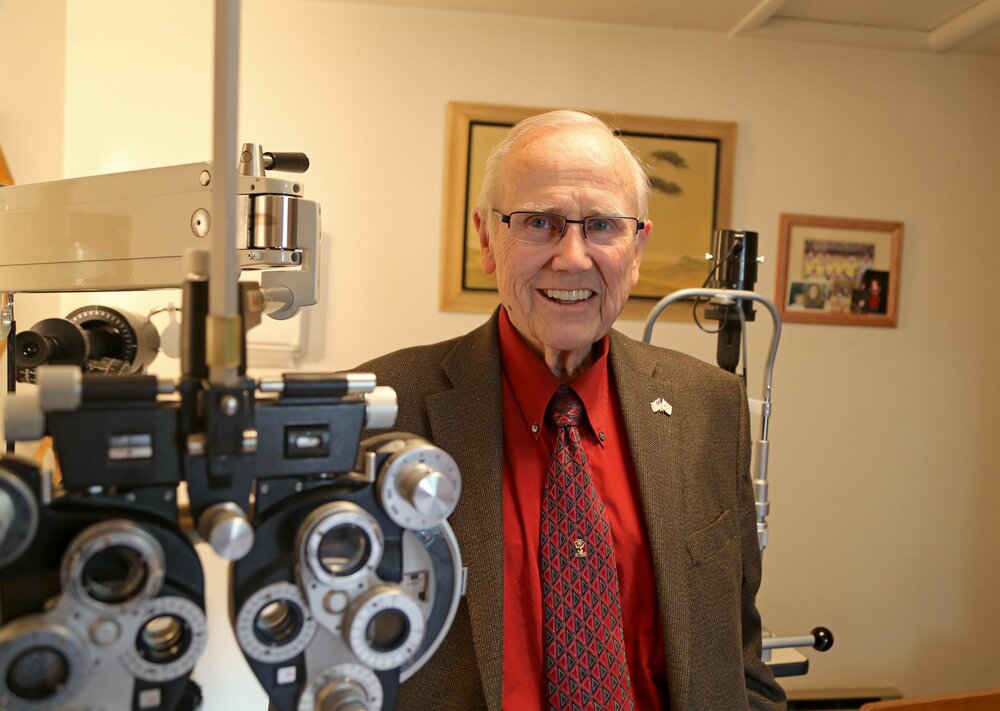 Dr. Robert Dee Magwire, O.D. passed away peacefully at his St. Maries home on January 15, 2023. A true community servant, Robert, or as most called him, Dr. Bob, was born June 21, 1931, in Cheyenne Wells, Colorado to Dewey and Elsie (Philips) Magwire. He was the youngest of six children.

As a child, he and his family moved to Oregon. After graduating high school, Bob worked at the Siskiyou Smokejumper Base in Cave Junction and would later enlist in the United States Air Force and serve his country as an aircraft mechanic based in Okinawa, Japan during the Korean War. While in the military, Bob married Diane Harper in 1951. After the military, Bob began his college education at Pacific University in Forest Grove, Oregon.

After graduating as a Doctor of Optometry in 1959, Bob moved to Idaho and began his more than 60-year impact on the state he loved. In his early career, he practiced in communities all over Southern Idaho, stretching from Weiser to Soda Springs. Eventually, he and Diane settled in Boise and raised two children, Shannon and Shaun. He would later meet Barbara Baker, marrying in 1983. In Boise, he owned and operated the same practice for 30 years.

In 1990, he and Barbara relocated to North Idaho, having purchased practices in St. Maries and Wallace, eventually making a home in St. Maries. He would later relocate the Wallace practice to Kellogg and open others in Hayden and Rathdrum. Constantly on the road between the practices, he truly believed that his calling was to provide small communities access to quality optometric services. He retired in 2017, capping a distinguished career that spanned 59 years.

Known for his infectious smile and quick wit, Bob was a proud member of Kiwanis. When not asking patients “1 or 2?,” he could be found flipping pancakes at Kiwanis breakfasts, chopping wood for those in need, or helping raise money for the Paul Bunyan Days fireworks display alongside his fellow Kiwanians. He would also frequently spend his free time walking along area roads and highways picking up trash. When asked why, he observed, “Well, it’s something to do. And it’s something that helps.”

Bob is survived by his daughter Shannon and her husband Chris and their children Erin and Connor; son Shawn and grandson Dakota; stepdaughter Brenda; stepdaughter Joy, her son Jesse, and his wife, Kim.

Bob was preceded in death by his wife, Barbara, in June.

Bob’s family would like to share their eternal gratitude for Terrie Derry, Jennifer Osier, and Hospice of North Idaho for making it possible for him to be home at the time of his passing.

A memorial service will be held later in the year.

A Memorial Tree was planted for Robert
We are deeply sorry for your loss ~ the staff at Hodge Funeral Home
Join in honoring their life - plant a memorial tree
Services for Robert Magwire
There are no events scheduled. You can still show your support by planting a tree in memory of Robert Magwire.
Plant a tree in memory of Robert
Share Your Memory of
Robert
Upload Your Memory View All Memories
Be the first to upload a memory!
Share A Memory
Plant a Tree