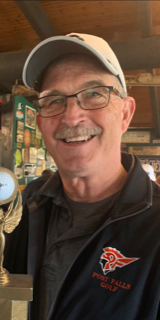 Bill Lawson (64) former St. Maries, ID resident and current resident of Coeur d’ Alene, ID passed away at the Schneidmiller Hospice House on December 23, 2022, surrounded by his loving family.  He was born to Herb and Charlotte Lawson on February 23, 1958, in Newton, NJ.  Bill grew up in Newton and graduated from Newton High School with the class of 1976.

Following high school, Bill attended William Penn College in Oskaloosa, IA.  He graduated with a BA in Education in 1980.  Bill then moved to Superior, AZ for a teaching job.  He furthered his education by attending Northern Arizona University in Flagstaff where he earned his MA in Education.  During this time, he would work the school year in Arizona and return home to Iowa for the summers.  It was then he met the love of his life Neisha Gay.  The couple married on December 23, 1982, in Oskaloosa building a beautiful life and marriage that lasted 40 years.  Bill and Neisha made their home in Superior, AZ where their son Jeremiah was born, and Bill served as Athletic Director and a teacher for 12 years.

Bill’s secretary at the Superior school happened to know Jerry and Glenda Bailey from St. Maries, ID since they too started their careers in Superior, AZ.  Because of this connection, Jerry Bailey contacted Bill to offer him a job replacing upcoming retiree Terry Doupe, the Wood Shop and Carpentry Teacher for the St. Maries School District.  In 1996 the Lawson family moved to St. Maries where Bill taught Wood Shop and Carpentry for both the middle school and high school.  A talented athlete himself, Bill also coached golf, wrestling, and football serving as a referee for wrestling as well.  In 2014 Bill was offered a position at Post Falls High School, so he commuted for 1 year before he and Neisha made Coeur d’ Alene their permanent home.  He also taught carpentry and coached golf for the Post Falls School District.  Bill retired in June 2022 after providing 42 years of education to a few generations of kids.

Bill enjoyed the outdoors, snowmobiling, hunting, building and wood working, and spending time with his family.  He also loved golf often taking first place in local tournaments.  Bill impacted the lives of so many children and people on his adventure through life and he will never be forgotten.

Services for Bill will be scheduled later this Spring.

A Memorial Tree was planted for Bill
We are deeply sorry for your loss ~ the staff at Hodge Funeral Home
Join in honoring their life - plant a memorial tree
Services for Bill Lawson
There are no events scheduled. You can still show your support by planting a tree in memory of Bill Lawson.
Plant a tree in memory of Bill
Share Your Memory of
Bill
Upload Your Memory View All Memories
Be the first to upload a memory!
Share A Memory
Plant a Tree